This table mode is called “natural tables” or “automatic tables.” I'd call it “HTML tables,” because it's very similar to them. They're especially suited for XML conversions.

You find a lot of samples in enattab.pdf

Willi Egger wrote a My Way how he set a typesetter's lead type case: Use of natural tables

To place a table use:

Be aware of the brackets surrounding the bTABLE ... eTABLE part!

You get automatic page breaking with the option [split=yes].

Try to divide your table into...

If you must split a natural table over several pages, you can simply do this by adding \setupTABLE[split=yes] to your TABLE definition. Another way is to define it right at the TABLE start by adding the parameter [split=yes] (see example). However, \startlinecorrection can lead to unpredictable vertical spaces between rows [1].

In this case the table head (all between \bTABLEhead and \eTABLEhead) is printed only once at the beginning of the table. But if you use [split=repeat], it is printed on top of every new page, that contains parts of your multipage table. Please take account of the fact, that the head cells are enclosed by \bTH and \eTH (and not \[be]TC).

If you want to use an alternative table header for all following pages, you can do this by defining an additional header. Just add the second header between \bTABLEnext...\eTABLEnext, right after your normal head definition. Now every additional page of the multipage table starts with the next table head.

The table foot is declared between \bTABLEfoot and \eTABLEfoot. It defines the concluding row of your natural table.

Beware: Split tables often begin not on the page (or in the column, if you use them) where they could start, but on/in the next one. This is a known limitation due to the complicated calculation of remaining space on the page. That won't become better before this calculations are newly written in Lua. (Said Hans on 2010-09-24.)

The following standalone example deals with all the mentioned aspects of natural tables. Just copy&paste it as a starting point for further experiments...

... just work (at least in luaTeX and not here...). See the following example.

The next lines are an example of transforming the data into a natural table, but can be easily adapted to any type of the table or perhaps (mis)used in even more strange ways:

The following lines will then finally result in a desired table:

Some remarks: the (tentative) code ignores the fact that

What about separating the values using tabs?

Everything is easy when a simple grid is enough. Unfortunately, this is not the case most of the time, tables tend to have information which should flow accross cell boundaries either vertically or horizontally. One of the reasons to use TABLE instead of the table environment is that TABLE provides an easy (relatively speaking, at least) way to make merged cells to both directions.

There are probably as many ways to design TABLEs as there are users, but a simple one to begin with is to start with a grid: 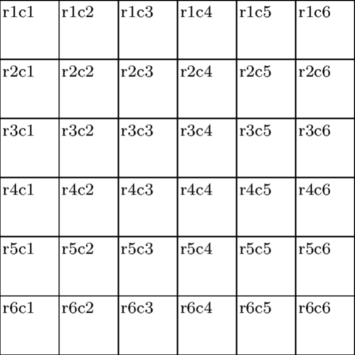 The desired table layout is then drawn onto this grid, and the top left corner cell of each cell in the final layout identified: 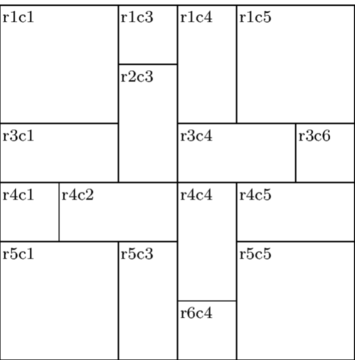 The cells are listed from left to right and up to down. Each larger cell is then given it size by using nc=... and nr=... parameters with \bTD. The code producing the table above is:

N.B. There is an ugly hack in the code. An empty first row with zero height and no borders is added. If the row is omitted, then something odd happens to the number of columns. The table should have all cells, so this may be a bug. (Or then I have blundered something with this example, possibly.)

Everything rectangular can be done with TABLE, as long as it can be fit in the grid. The grid does not have to be equidistant, and if its dimensions are omitted, the program will fit the data in. L-shaped or other complex cell shapes are not possible. Using them would be a bit odd, in any case, as alignment and text flow problems would be quite interesting.

The setup commands for TABLE do not seem to be very verbosedly commented. There are, however, a few shorthands, which are useful to understand. First of all, there are several ways to address cells. This is a brief summary of some of them:

A list contains one or more numbers separated by commas. Word "last" is equivalent to the number of the last row or column. The complete list can be replaced by the word "each" to address all cells on the row/column.

Let us consider the following table:

In plain language the rows are interpreted as follows:

and vertically in the middle (lohi), and remove all frames (borders)

In this case the table is slightly complicated, there are some split cells, as shown below:

The cell numbering is well worth noting. It is very logical (upper leftmost part of a combined cell), but sometimes the results are surprising in the beginning.

The important point about cell numbering is that there is really a difference between "bottom border of row 3" and "top border of row 4". To illustrate this, let us change the frame setups:

At first sight this is exactly the same thing. But... 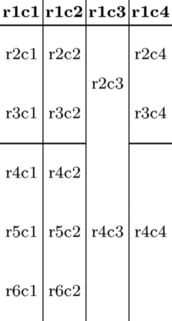 Where did the horizontal line in column 3 disappear? Nowhere. There is no row 3 in column 3, so there cannot be a frame under it. This problem can be overcome by using topframe and leftframe instead of bottom and right, as the cells below and to the right of a border have to exist.

However, this solution leaves the problem of bottom and rightmost borders. How to draw a line in the bottom of the table? Using \setupTABLE[r][6][bottomframe=on] will leave the gap in columns 3 and 4, and \setupTABLE[r][7][topframe=on] is not possible, as there is no row 7. The clever idea of using "last" instead of the row number (6) will fail, as "last" seems to behave exactly the same way as number 6.

One useful method is to switch on the borders cell by cell by adding \setupTABLE[3,4][4][bottomframe=on], i.e. draw a border under cells r4c3 and r4c4. 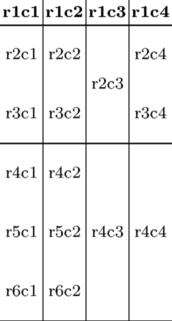 The problem which I was seeking to solve is shown in the above example. The text alignment of the emphasized cell is not optimal. Hans pointed out the possible solution.

There is only one value for all four borders. However, MetaPost can be used as a workaround until the separate "rulethickness" values are implemented.

The following example (mkiv only!) by Wolfgang Schuster shows a table using MetaPost for the rules:

See the corresponding thread on the list: rules with different thickness

ConTeXt can align columns of numbers on a character (often a decimal point to align accounting data) automatically, removing the need to add fixed spaces into your document. For any such column you need to specify the character on which to align. You use the aligncharacter=yes parameter to set up character alignment, alignmentcharacter={.} to say what the character should be (in this case a full stop) and align=middle to set the overall alignment of the column.

You'll note that the final line, because it has no . in the number, gets aligned under the right-hand side of the numbers. In most circumstances you would want such a number aligned with the left-hand set of digits. To so do, issue the following command in your preamble:

and now the table above will turn out like this:

If there's no alignmentcharacter in the cell, the content will be aligned in the following way depending on the value of \characteralignmentmode:

When writing a table you can omit empty cells and define only cells for specified columns. To have this feature fully available you need to have a beta or a quite fresh ConTeXt version.

Here is an example using the "n" option:

Here is an example using the "m" option:

For a different approach for round corners and colored background follow the text after this example.

It is possible to round the corners of the table if you turn off the main frame of the table and frame the table in \framed. Compare two different approaches in the first and second example.

You can't color the background of the table with round corners unless the frame rulethickness is not big enough to cover the rectangular corners of the background (second example). Well, you can if you frame the table twice. Once in the thick white frame and then in the thin frame with negative offset and slightly smaller corner radius (third example). Be aware of other complications -- notice that the thick white frame is still visible in the text above it. 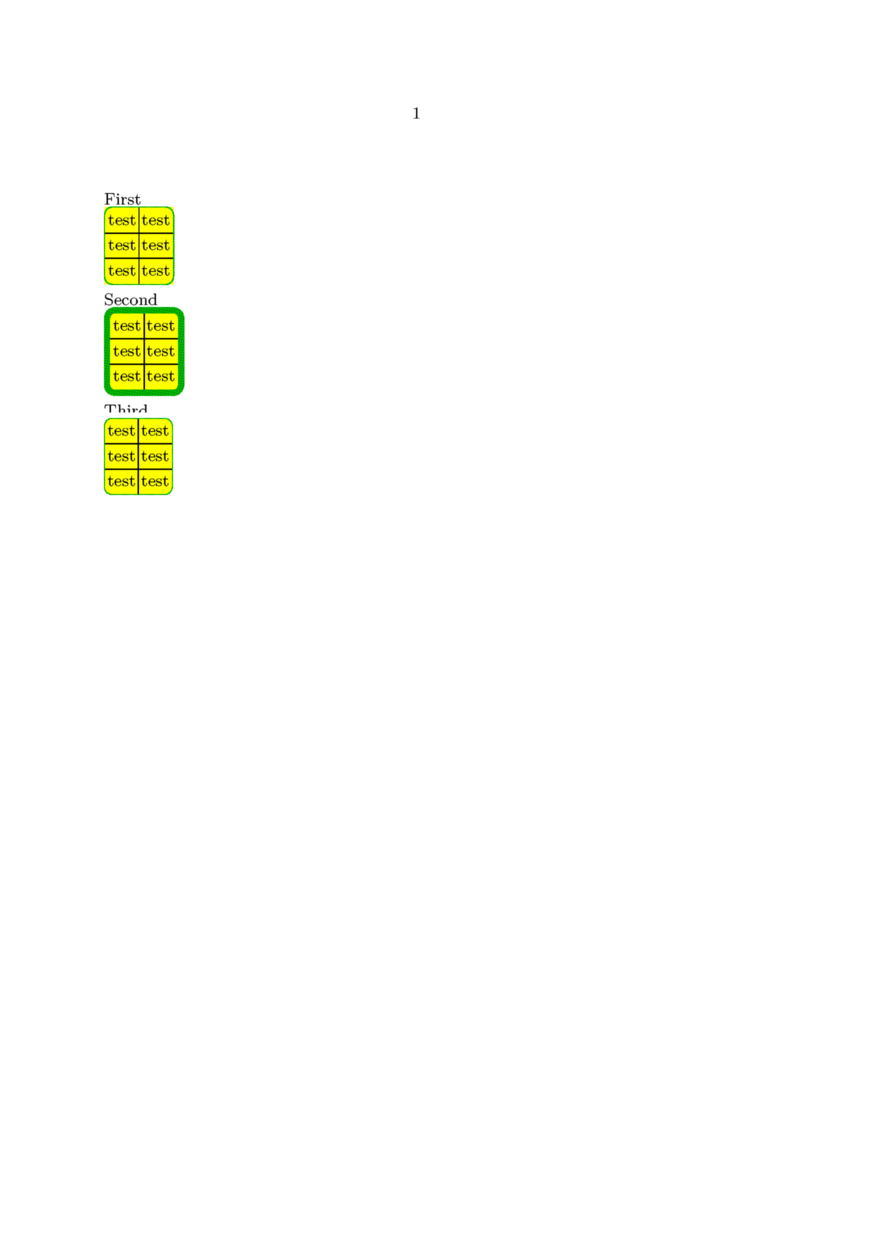 From 2006-10-11 on, ConTeXt contains one more mechanism for round corners. Watch the example: 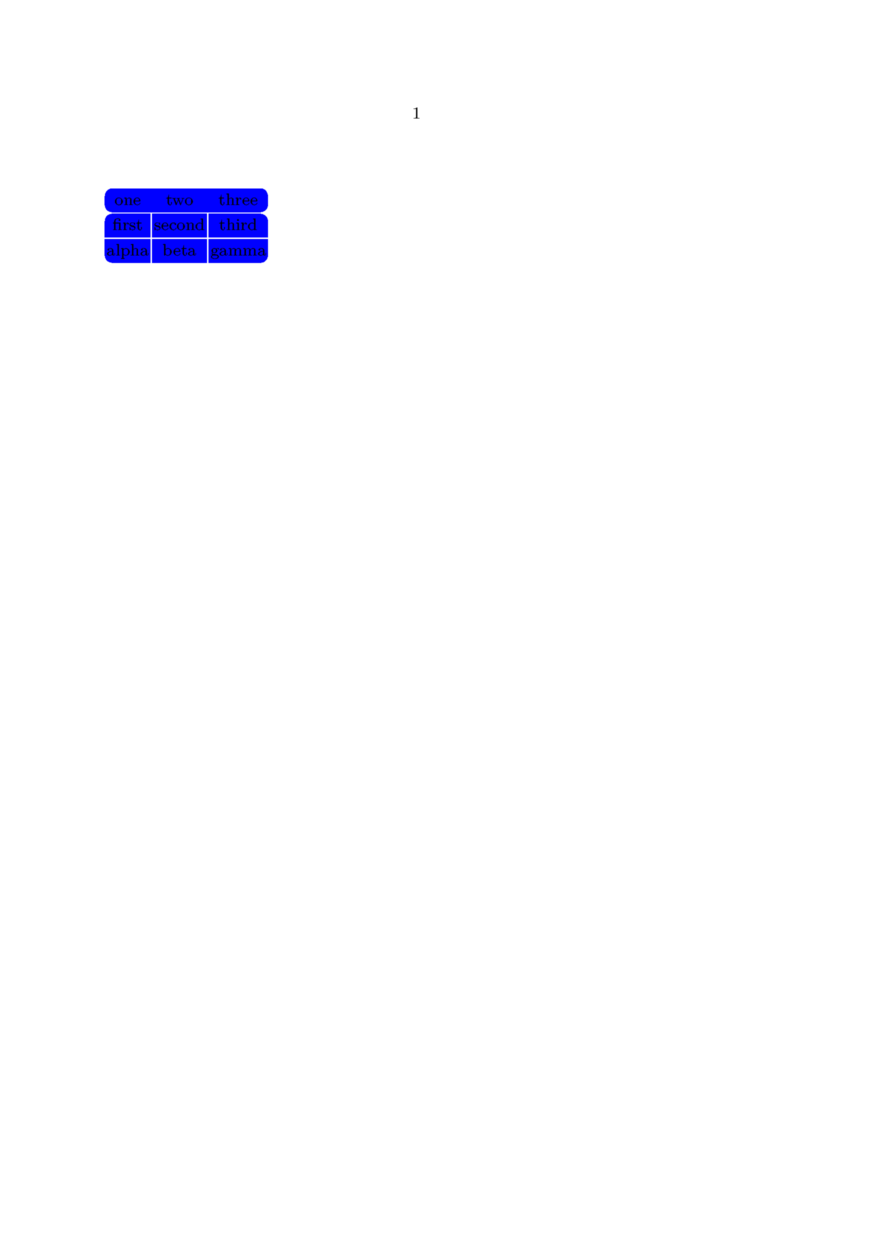 Some other useful options that were not covered above:

This is now part of the core as the NTE module. Quoting its internal documentation:

This module is suggested by Wolfgang Schuster who also prototyped it and came up with the rationale:

This module provides an easy way to use natural in a similiar way as the older table module (based on the TABLE macros) and the newer tabulate module.

You can see the advantage in the following table, once created with the new macros and once with the normal macros provided with the natural table module.

Let us start with the original macros:

Watch how the new macros use less code:

The actual code differs from the prototype that it does not need to collect whole rows and parse them but looks ahead instead.